Until the Day We Die – Congratulations, Jockie. 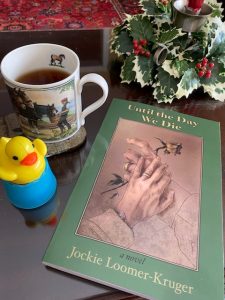 Until the Day We Die

Tea and my newly-arrived book, Until the Day We Die by Jockie Loomer-Kruger. What could be better?

Jockie’s first book, Valley Child – A Memoir, was self-published in 2016 when she was 80. In it, photos of 33 of her folk-art pieces accompany stories about growing up in Falmouth, Nova Scotia, Canada. I was delighted to attend her book launch in Waterloo, Ontario.

Having moved back to her home province in early 2020, Jockie used the COVID-19 isolation to polish the manuscript of her first novel. Until the Day We Die found a home with Moose House Publications, a publisher that specializes in fiction and non-fiction written in, or connected to rural Nova Scotia.

I was privileged to read Jockie’s manuscript last year. My entire review appears on her web site but she included a portion on the back cover of her book: An achingly honest portrayal of both the tender moments and the myriad challenges of navigating end-of-life-realities. – Laurie Ness Gordon, Author of The Medal.

Congratulations, Jockie! You are an inspiration.